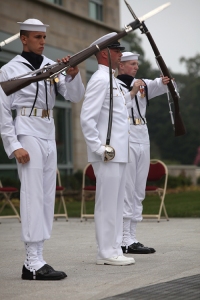 A U.S. Navy drill team stunned the audience and received several rounds of applause for precision maneuvers during the Scott Building grand opening.

Hundreds of people came to the Armed Forces Retirement Home in Washington on Aug. 29 for Great Scott, the program dedicating the new, state-of-the-art Scott Building on campus. Friends of the Soldiers Home was honored to participate in this great event with the Home and President Lincoln’s Cottage.

As part of the day, people took tours of President Lincoln’s Cottage and other historic buildings on campus, including the home where President James Buchanan stayed when the Home served as the Camp David of the later 1800s. DC Reynolds and Captain Cookie provided tasty tacos and fresh cookies, while residents gave tours of the new Scott Building. Children enjoyed the petting zoo, while people of all ages loved climbing to the top of the Sherman Building tower for an unsurpassed view of the nation’s capital.