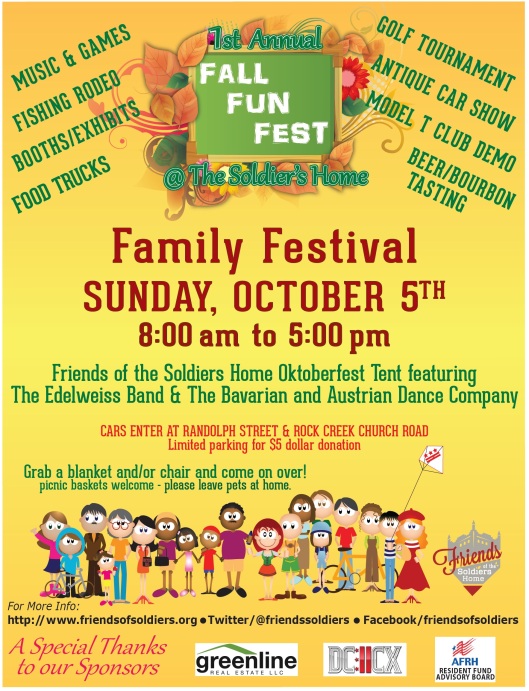 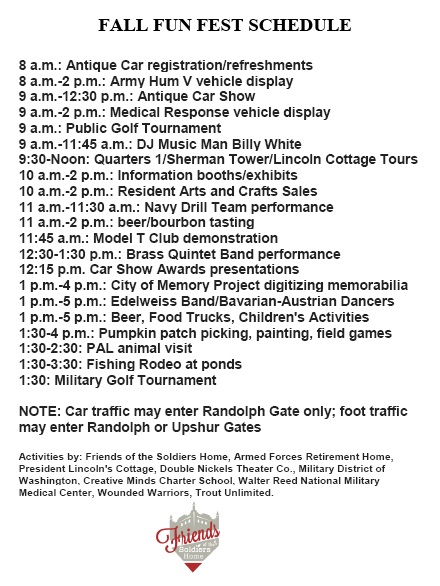 Friends of the Soldiers Home is proud to announce that The Edelweiss Band will be performing Bavarian dance and bier drinking music at the Oktoberfest Tent during Fall Fun Fest on Oct. 5, from 1 p.m. to 5 p.m. In addition, the Bavarian and Austrian Dance Company will be on hand to get everyone out of their seats and dancing at this wonderful event!

The Edelweiss Band began in 1969 when its founder and previous leader, Lothar Steschner, played Bavarian and Austrian waltzes and polkas at the Schnitzelbank Restaurant in Wheaton, Maryland. The band has since expanded and played numerous events at the German and French Embassies, Freedom Plaza and numerous other locations.

The Bavarian and Austrian Dance Company performs at events throughout the region. Notably, the troupe performed at the 2012 Oktoberfest at the Armed Forces Retirement Home to great audience enjoyment.

Fall Fun Fest runs from 8 a.m. to 5 p.m. on Sunday, Oct. 5 at the Armed Forces Retirement Home campus in Washington, D.C. The Oktoberfest Tent portion of the festivities will run from 1 p.m. to 5 p.m. In addition to the fun under the tent, the day’s activities include a car show, golf tournaments, beer and bourbon tasting at Lincoln’s Cottage, a fishing rodeo at the ponds, military displays and much more!

Friends of the Soldiers Home marked its 100th volunteer event by staffing a table at which people created cards for residents of the Armed Forces Retirement Home-DC. Eight volunteers worked at the table at the annual Lincoln’s Cottage Family Day on Sept. 13 from 10am to 5pm. So far this year, 142 different people have volunteered at least once for Friends of the Soldiers Home. Thanks to this participation, the Friends has sustained a vision of better connecting the Home with the surrounding community, a vision that began with a handful of neighbors getting together on 11/10/11. Thanks to all volunteers, Home residents and staff, and organization supporters for making this happen! Now, on to the next 100 …

Photos below by Isabelle Hughes 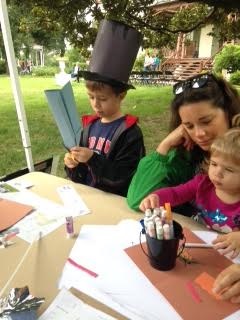 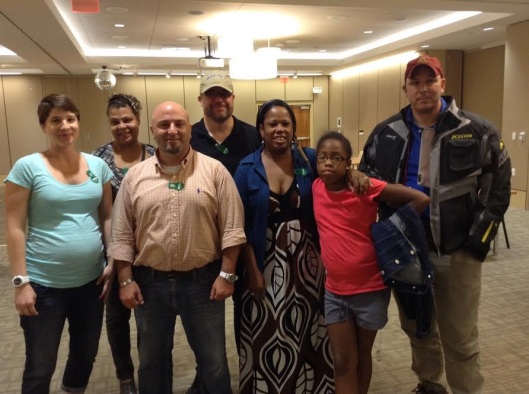 Great photo of Nora, Tee, Drew, Michael, Tamia, Erin and Jeffrey (above) — this was most of our volunteer crew for Jingo at the Soldiers Home-D.C. on 9/11. This was a special day to give something back to veterans! In the other photos, volunteer Tee gives assistance to her left, and to her right, during the game. This was the 99th volunteer event for Friends of the Soldiers Home since it formed on 11/10/11. News from the 100th event coming in a few days! Thank you volunteers, thank you veterans. Photos by Lori Lincoln.

We will post details of Sunday Oct. 5 Fall Fun Fest activities through the month so watch this space. The number of different activities at the all-day event is almost staggering! We begin with golf. There will be two golf tournaments that day — one for community participation at 9 a.m. and one for active military, retirees and Wounded Warriors at 1:30 p.m. See details on flyers below. Both events will raise money for the Armed Forces Retirement Home Resident Fund. This is a fund that supports activities for residents who live at the Home. Remember that besides golf, the day will feature many other activities, including a community walk, Oktoberfest band and dancers, food, drink, military displays, Lincoln’s Cottage activities, car show, and so on. This is the most extensive event open to the public at the Armed Forces Retirement Home in D.C. that I can recall. Mark your calendars and get ready to have fun! Stay tuned for more information. 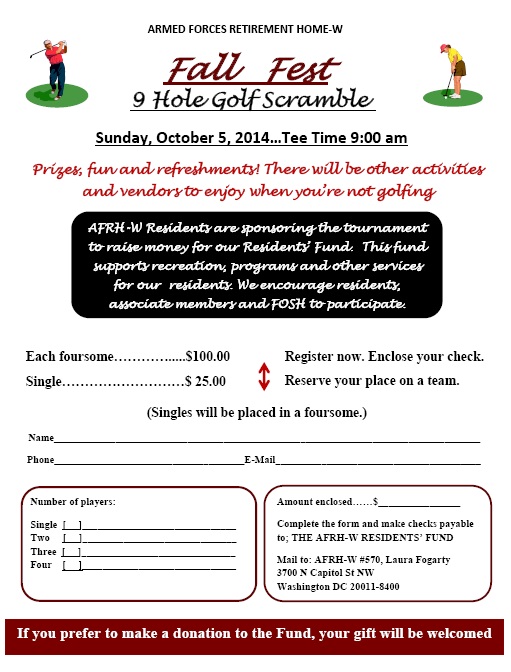 Unforgettable … that describes both the evening and a song sang by Ms. Geneva Renee at the monthly Saloon Night Sept. 2 sponsored by Friends of the Soldiers Home at the Armed Forces Retirement Home in D.C. Ms. Renee, who did a duet with resident Chuck Felder seen in the photo below, has been among the more popular entertainers the Friends bring in for this event. 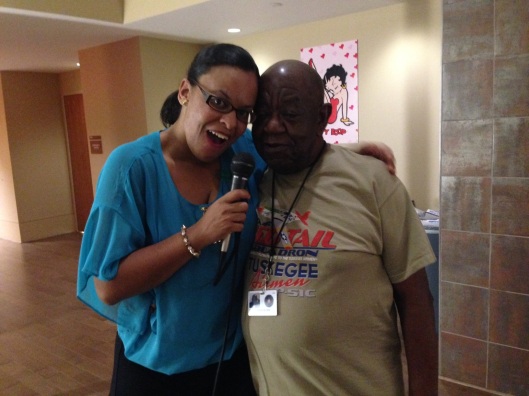 Ten Friends volunteers added to the enjoyment by serving up pizza, drinks and pleasant conversation with our veteran pals. Other photos: Kerry Hamblin checks in with Chuck and Bill; Mosesso, Fergie and Woessner kick back and enjoy the music; Joe enjoys his visit with Amalia. To be part of the fun, drop a line to Lori Lincoln at volunteerfriendsofsoldiers(at)gmail(dot)com. 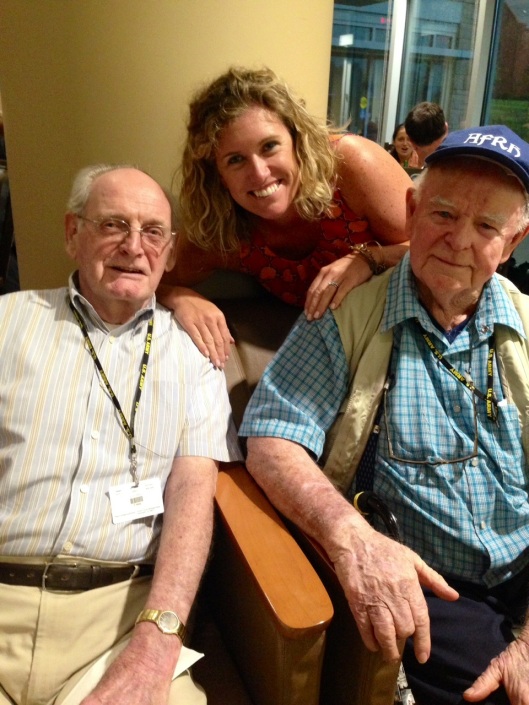 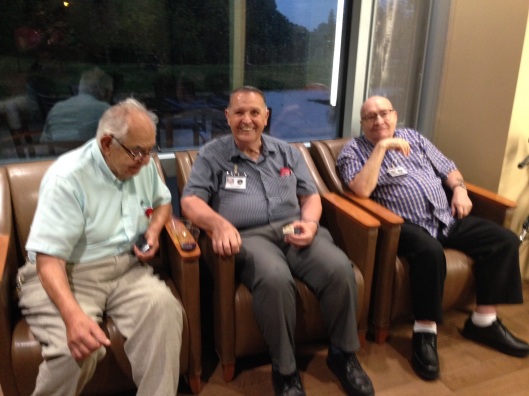